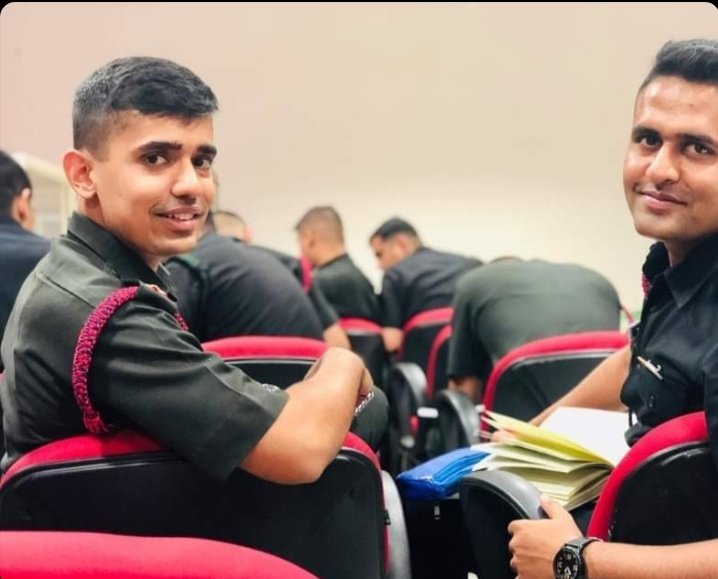 Bare coincidence that both of them were (aviators + best friends + NDA batch mates + room mates in Nashik) left us, almost together. Hence few lines which define their friendship:

Major Anuj’s father has penned down a short and  beautiful poem in their memory:

On 21-Sep-2021 (barely 6 month’s before Major Sankalp attained Veergati), Sankalp’s best friend and also an aviator, Major Anuj Rajput (sitting on left in the above image) also attained Veergati while serving the nation in Jammu & Kashmir.

• Both joined NDA together in the same Batch/course number 126.

• Both were from the Artillery Background.

• Both did their advance aviation course from Nasik (together) – they were room partners during that course. On the completion of this course, Anuj stood 1st while Sankalp was 4th in the merit list.

• Both the accidents happened in the state of Jammu & Kashmir (for Sankalp it was in Gurez near Sri Nagar while for Anuj it was near Udhampur).

• Sankalp had bought a Villa where as Anuj took 4 BHK Flat & both of them were about to shift.

• Both had a passion towards driving and so they Purchased the SUVs together. They were also about to purchase new cars for their parents.

• Both the mothers – “Usha Ji” are TEACHERS by profession.

His Profile on Honourpoint - an online memorial for every Indian soldier